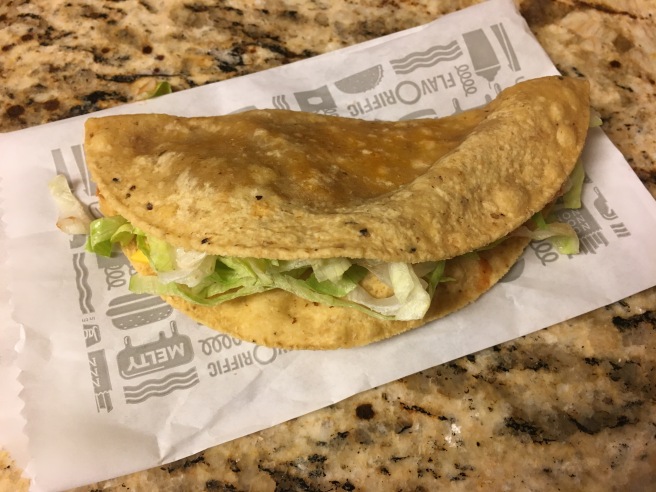 Sometimes these cravings will get to ya! Food is so addicting! I woke up today a little hungover and with brutal PMS cramps. This combo always brings me to greasy fast food. Darren got up early and started getting things done. I looked at him with the face I always make when I want something. He got my sign and said “What do you want to eat?” I got giddy. Jack in the Box was on my brain. Those tacos though!!! So, I got in my car and drove to Jack. The whole time I had major guilt. The last bad meal I had was sushi. It’s been almost 2 months since we started this and I have had like 3 slip ups.

I get myself 4 tacos and Darren a breakfast sandwich. I came home feeling like I just bought a bag of crack. Seriously think about it! I knew it was bad for me, but I still craved it, still sought it out, still bought it, and still consumed it. If you don’t think you’re addicted to gluten or any other food, then ask yourself to cut it out. 100% That’s when your eyes open! I have had so many people tell me that they couldn’t do this or live this way because they love food. I get it. I totally do! But that tells me you’re addicted to the shit. I was salivating pulling the taco to my face. I was hooked. I sat in my kitchen and devoured all 4 tacos before I could talk myself out of it. Yep. I’m addicted too.

As soon as I finished eating, I started paying close attention to how I feel. I immediately felt my heart rate increase and I began feeling anxious for absolutely no reason. Why am I panicky all of a sudden? I feel overwhelmed like the walls are closing in. I haven’t felt this way in a long damn time. I don’t like it! This is 100% my food. I went from mellow fellow to antsy Nancy immediately.

I hate anxiety so much. I’m so mad I just fed it to myself.

It’s only been 45 minutes since I ate the tacos and I already regret every second of it.  My sinuses are now killing me even though I haven’t had an ounce of pain in months. These stupid cravings are so not worth the aftermath. Now I have heartburn and bubble guts. What in the fuck was I thinking?!

Such a bad idea. I guess I needed a reminder of why we don’t eat this way anymore. Duly noted. Thanks Jack.

Just another mom trying to make it work! View all posts by torriekidd0417

We are trying to develop a new and healthy lifestyle while trying not to lose our minds at the same time!
%d bloggers like this: